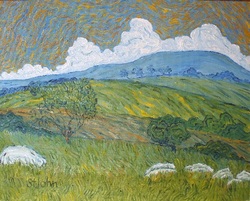 Common south of Cosdon Hill, Oil 16x20
A number of these paintings were painted in during Roy's residence in Devon, others followed once he returned to St. Louis.
In the village of Spreyton, there is a post office, the Tom Cobley pub, the Spreyton Hairdressing Company, and a church (bell-ringing practice every Tuesday.) Many footpaths cross the fields and by Summer the ground is at last dry enough to wander.

Shortly after leaving the village, Cosdon Hill looms into view, a soft sloping hill that catches the sun most of the day, giving it a warm glow. It would be one of the first sights on leaving home in the morning and the signal that we were close to home on our return. Many of the paintings feature Cosdon Hill and, once climbed, it offered wonderful views of the surrounding landscapes.

Path above Sticklepath 16x20
Devon is know for its picturesque villages, narrow roads, and high hedgerows. In the Spring and early Summer, the hedgerows are so overgrown and laden with wild flowers - and in late Summer with ripe blackberries, crab apples and hazelnuts - that the narrow roads are very nearly un-negotiable, even on a pushbike.

Sticklepath from Atop of Cosden Hill, Oil 16x20
Passing through the village of Sticklepath en route to the the larger town Okehampton, you will find the Finch Factory, a restored early 19th Century forge powered by water wheels. Okehampton is known as the 'Capital of the Northern Moor', at one time an important town in the wool trade. High on a spur outside the town is the ruin of Okehampton Castle, the largest castle in Devon, occupying a beautiful site with bluebells, woods, open fields, and streams. From the Castle you can look down at the town and the millstream straddling two branches of the River Okement. From Okehampton you can ride the train into Dartmoor National Park. The National Cycle Network also passes through taking you across to Meldon Reservoir and to the moors.

Hound Tor, Oil 18x24
Dartmoor is one of ten designated National Parks of Great Britain, which ensures the conservation of the natural beauty, wildlife, and cultural heritage of the area.  At one time a range of mountains covered the area but over time erosion has removed the softer soils, leaving outcrops of granite exposed - these are the 'tors', much loved by hikers and climbers. Dartmoor attracts its own weather, gale force winds, drenching rain and snow late into the season. This results in an undisturbed moorland providing a rare habitat for wildlife and the preservation of many prehistoric sites. It is a mystic and wonderful place. Hound Tor is so popular that a refreshment van makes its home in the car park with a sign on the side announcing 'Hound of the Basket Meals'. On a recent visit we found the van, updated, but still serving great cups of tea.