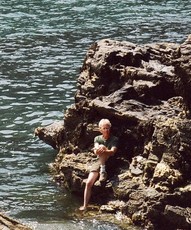 Roy was born in St. Louis, grew up in southern England and his visits to Dorset and Devon with school chums left lingering and delighted impressions for his paintings. Devon and Dorset became havens when he moved to London to sing with the pub rock bands Phoenix and Billy & Leroy.
After a break of almost twenty years Roy returned to live in the UK with his wife Lindsey and, from 2005, they lived in the West Devon, close to the edge of Dartmoor and less than an hour from Exmoor and the coast. Roy's paintings convey the contradictions of the landscape and villages that surrounded him. Roy has been fairly prolific since his return to England and much of this work can be seen on the gallery pages.

Village North of Widdecombe, 24x30 oil, 2011
Roy studied Art in Guildford, Surrey. He uses traditional oils whenever possible - however, because of the cupidity of British weather and the lack of light in barn close to his home, many of Roy's paintings have been created with water based oils and occasionally acrylics. This allows him to enjoy the comforts of home with his favorite music for company. More often than not, Roy uses a palette knife and prefers canvas board as his working surface, though he has, in the past, used paper bags, cardboard and a slab of butchers block too heavy to hang! 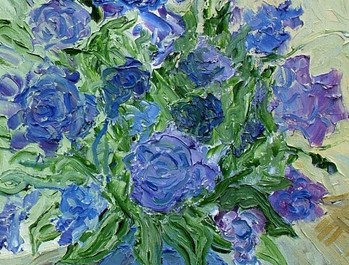